Operation Flashpoint 2 is the official sequel to the award winning Operation Flashpoint: Cold War Crisis. The game is a ‘first person shooter’ and military simulator, which challenges players to survive the chaos and rapidly evolving situations of modern warfare in a new contemporary theatre.

In Annihilation maps, the USMC and PLA teams fight to control the entire battlefield, with access to both extensive weaponry and vehicles as well as full command of AI recruits. The winner is declared when one team is annihilated. Annihilation plays out like a standard PvP team deathmatch, except over a large battlefield with vehicles and AI allies. 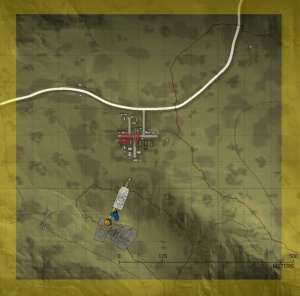 Battle for Molga Ridge has a mix of vehicles, armor, open space and Close Quarter Combat in the village. Due to the number of vehicles involved the infantry is forced to take cover in the village and engage in close combat.

In Chokepoint USMC and PLA forces start on opposite sides of a narrow bridge which favours more long range combat compared to the Mologa map. There is the ability to flank and attack from either side or use amphibious vehicles to cross the water, but often the map involves both forces trying to secure the bridge itself.

In Infiltration maps, the PLA team defends an objective, while USMC Special Forces team tries to destroy it with explosives. Here, the teams (and tactics) are asymmetrical: USMC has superior weapons (advanced optics), while PLA starts with a 2:1 player advantage.

On Home Soil takes place around the US Embassy Compound of Madlenka. The PLA have taken control of the compound and have an Anti-Air Sunburn Missile launcher there. The USMC Spec Ops team must infiltrate the compound and destroy the launcher. Although the PLA have the larger forces, the Sunburn launcher is easily destroyed if the USMC can get close enough and there are plenty of wooded areas surrounding the village which can give cover.

Raskova airfield mixes open spaces with ditches and clusters of buildings. The objective is for the USMC Spec Ops team to destroy the Airfield’s control tower. Cover is much sparser than the Madlenka map, so it favours a much more direct approach. The USMC Spec Ops team is equipped with Fast attack vehicles and smoke grenades, which means the PLA must prepare their defence quickly as they could be attacked from any and every angle very soon after the map has started.

This entry was posted on April 22, 2011 by jstowe. It was filed under Industry Projects and was tagged with Co-op, Ego Engine, FPS, Level Design, Lua, Multiplayer, OFP:DR, Open World, Single Player.